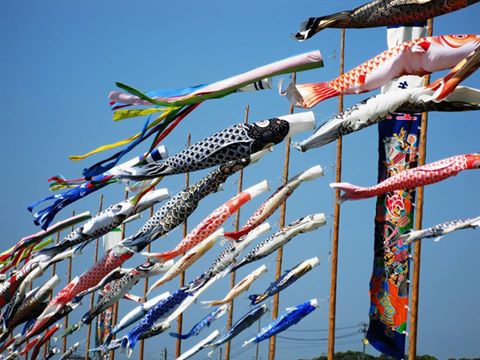 Golden Week is a collection of four national holidays within seven days. In combination with well placed weekends, Golden Week becomes one of Japan’s three busiest holiday seasons, besides New Year and the Obon week.
Trains, airports and sightseeing spots get very crowded during Golden Week, and accommodation in tourist areas can get booked out well in advance.
The national holidays making up the Golden Week are:
April 29
Showa Day (Showa no hi):
April 29 is the birthday of former Emperor Showa, who died in the year 1989. Until 2006, Greenery Day (see May 4) used to be celebrated on this day.
May 3
Constitution Day (Kenpo kinenbi):
On this day in 1947, the new postwar constitution was put into effect.
May 4
Greenery Day (Midori no hi):
Until 2006, Greenery Day used to be celebrated on April 29, the birthday of former Emperor Showa. The day is dedicated to the environment and nature, because the emperor loved plants and nature. Before being declared Greenery Day, May 4 used to be a national holiday due to a law, which declares a day, that falls between two national holidays, a national holiday.
May 5
Children’s Day (Kodomo no hi):
The Boy’s Festival (Tango no Sekku) is celebrated on this day. Families pray for the health and future success of their sons by hanging up carp streamers and displaying samurai dolls, both symbolizing strength, power and success in life. The Girl’s Festival is celebrated on March 3.

Communication is one of the most important parts of our daily life. We cannot live without communicating with others in various ways. Communication is an art that everyone has to master. When communicating, we need to know the do`s and don`t`s to carry out a good and successful conversation.However, not all conversations can end up positively, along the way problems may arise. So, what are the things that we should do to avoid these and to have a better conversation?
Here are some tips from Celeste Headlee, She discussed about ways on how to have a better conversation. Watch her video and learn.
Enjoy watching!